Published on August 10, 2013 by Bad Boy Cooking in A Bit of Fun, Commentary

While cooking at camp… 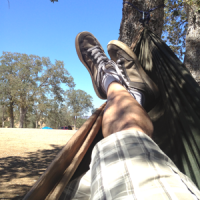 Abandoning the manic day-to-day lifestyle of LA in favor of a few technology-free days in the hills with a bunch of really cool people is one of the simple joys of life. Getting a nice sun burn, being eaten alive by about eight million mosquitos, forgetting your tooth paste, and no showering is a small price to pay for restored balance. Seriously.

Not surprisingly, we each took turns at our make-shift camp-kitchen to prepare the meals for everyone. I was teamed up with my best friend and together we made breakfast burritos. Note here, this is not a “share my latest recipe” post. It did however bring about a bit of an interesting discussion…

While cooking up about a thousand scrambled eggs, I asked one of the ladies to “Take my picture while I’m doing this… it’ll be great 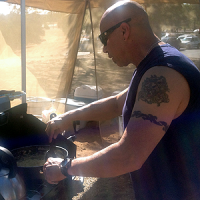 for the blog.” This of course started a conversation about Bad Boys Cooking (rule number 1).

In any event the conversation was of course, about the idea of using cooking to well… garner the romantic attention of the ladies. She of course was appalled. I think I may have been called a pig when I declared “there’s only one reason men date…”

That’s ok… if this particular lady was a target of mine, I likely would not have mentioned it. But there are other rules here. One being, your best friend’s sister is always off-limits. No matter how good lookin. 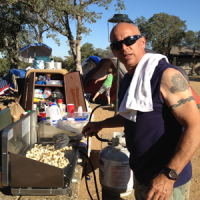 Without getting into the details of what turned out to be a rather controversial conversation, suffice it to say, she was not at all happy. Or so she stated. What I find rather funny, is she simply would not leave it alone. She kept on and on about it. Which leads me to believe only one thing. No matter how much she spoke against it, it stayed in her mind and kept her sufficiently intrigued (even if she doesn’t admit it), such that she sent me the following message after returning home from our weekend;

“So I have to say thank u for the advise (sic). I only had to give a hand job and my man cleaned the inside AND outside of my car wearing leopard skin underwear! U Rock! Lmao”

So there you have it… seems cooking and inspiring conversation about the benefits of doing so, even works on those who say it’s a terrible thing. Her man totally owes me. I guess you can say I really am a gastro-wing-man. Though it was ME cooking that got some for “her man.”