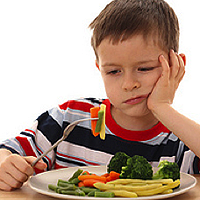 Like our tag line says, we like using food as foreplay. The meaning of that should be fairly clear, but stated here for clarity; It’s all about impressing your date and inspiring some… ahem… after-dinner activities. But what if that fine-lookin target of your affection happens to have children?

In this day, it’s entirely likely at some point you’ll be dating a woman with kids. It follows then, at some point you will be cooking for those little skrogs. Unless of course, you’re still among the younger set. Nevertheless, this little tidbit is likely to prove rather useful some day so check it out anyway.

Should you fail to impress and entertain those little linoleum-lizards you can forget any future visits from that lady.

The challenge of cooking for children

Great cooking doesn’t impress small kids. They either like it or they don’t. Pretty simple, really. Visual presentation doesn’t capture them either. At least not in the conventional sense. For them, the visuals need to be fun, goofy, child-like. As men, we are perfectly capable of behaving like children no matter our age, so on its own this really isn’t a challenge. The test however, comes in the form of combining great food with a child-like appeal, to impress two very different kinds of people. The hot chick… and kids.

Shared with you with compliments of cooking bad boy, Richard Binder of Temecula, here’s a little twist on spaghetti. Done in the spirit of inspiring giggles and playing with your food (which is perfectly ok if you’re a kid) while at the same time, providing something yummy for the lady. Thanks, Rick… 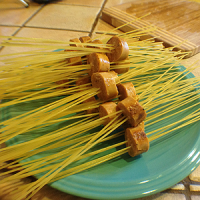 Start with your favorite sausage. I chose some nice sweet Italian. Mostly for its light color and light savory flavor. Sear it just to add a little bit of color. Nothing major. Take them off the heat and set them aside to let ‘em cool. After they’ve come down to room temp, slice them up into bite-sized pieces. Please consider the tiny little mouths of the tiny little kids. Choking a child is so very unattractive. Just sayin…

Now the fun begins. Take some of your un-cooked spaghetti and stab a few sticks through a slice of sausage. While it doesn’t have to be perfect, be sure to get close to center with the sausage
chunk. Do this with each of the sausage slices you have. Carefully set those aside until you’re ready to start cooking your spaghetti. We say carefully because you don’t want to 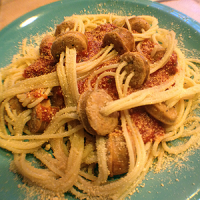 Now, the rest will be no different than when you make your favorite spaghetti dish. Once plated, you can dress it up with your best sauce (you know, that secret family recipe) and some Parmesan. Bam! Food fit for kiddie-eyes AND mommy-bellies.