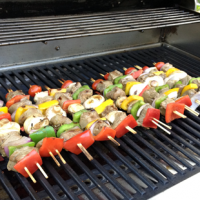 There is nothing quite so fine as a warm summer afternoon spent poolside with some of your closest peeps. Babes in bikinis, beef on the barbecue, and beer. What more can you ask for than scantily clad ladies who’ve been drinking while you, in your fine style, amaze and entertain as you grill it up?

You’re not a typical man. No no no… You’re a bad-assed cooking bad boy. You won’t simply settle for the typical burger, dog, or some sort of cold salad. For you it just isn’t enough to be the guy who brings such mundane fare. Instead, your gastronomic heart is set on something grilled but refreshing, light, tasty as hell, and certain to inspire the “ooh’s” and “ah’s” of the others. Enter the delectable Beer Kabob.

It’s dead-easy to make, presents wonderfully with the colors of summer, smells like wow, and goes perfectly with your favorite beer. Perfect for the poolside grill-fest. Check it out.

The key in this dish is really in the marinade. Which is a simple blend of stuff. Be sure to save some of it after the marinading is done. You’re gonna be brushing it on the kabobs while they grill.

The marinade. Start by chopping the steak into bite-sized pieces (for the purposes of presentation, try to keep each chunk the same size) – throw that into a mixing bowl. Cover it all with your favorite beer (have one yourself), salt, lemon-pepper, and garlic (All to taste so sample it as you go). Mix it all together, cover with cellophane and put it in the fridge for at least a couple hours. Every now and then, take it out and mix it up again. Now… if you can let it stay in the fridge longer than a couple hours, that’d be killer. All the beer will spin its beer-magic and work to tenderize that wonderful animal flesh. Walk away. Go have a couple more beers, snuggle with someone sexy, and relax.

Preparing the kebabs. Do this part after the meat has been soaking for a sufficient period of time, you don’t want to chop the veg until you’re ready to actually use it. 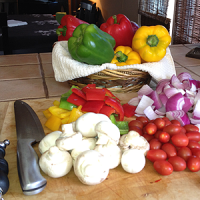 Chop all the onion, bell-pepper, and mushrooms, into bite sized pieces and set aside. Again, do your best to keep the size of all those morsels as uniform as possible. We like using large cutting boards so you can just leave the chopped up stuff in little piles on the board itself. There’s less to clean up that way.

Grab your handy wood skewers and start making your kebabs. What a bitchen invention the skewer is. Right? Speer your meat… place it over and open flame and viola… food!

How you arrange all the ingredients on the skewer is completely up to you. There is really no right or wrong way. Just arrange make them so there’s a nice balance of color and texture while keeping the wonderful steak-chunks as the prominent item. And of course, make each one the same as the one before it. Be sure to skewer all the pieces of your kebab right up against each other. Set these in an air-tight container. When you’ve used up everything and made as many kebabs as you need, seal the container and refrigerate until you’re ready to start grilling. 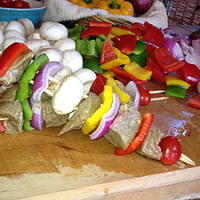 Handy tip: For each kebob use two skewers, side by side. This will hold everything steady and keep it all from rolling around while you’re workin it on the grill.

Take the rest of the beer marinade and put it into a bowl or other container and put that in the fridge too.

Grilling. This is where the fun begins. Start by having a beer. Because nothing goes better with grilling than beer. Your grill should be hot (medium heat) and clean of any grease or animal fat left over from your last barbecue. A wire brush is good for that. Scrub the grill once it’s hot and you should be ready to go.

Take your kebabs, set them on the grill and brush with the marinade you saved. Keep em cooking, keep flipping them around, and keep brushing on the marinade until done. The meat should be lust a little pink inside and the veg should soften just enough without becoming soggy. Remove from heat and serve.

These beer kebobs are a wonderful and light but meaty dish that goes well with just about any of your other barbecue munchies. Off course it goes well with your favorite beer too (assuming you didn’t already drink it all).