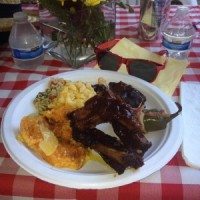 I’ve been sitting here trying to come up with a creative way to tell you all about my 4th of July this year. This one is rather significant for me as it represents my first Independence Day celebration since saying goodbye to LA and hello to my home town in the San Francisco Bay Area. I’ve been trying to come up with a witty essay, but sadly I cannot. Maybe it’s the heat. Maybe it’s because I’m still suffering from the food-coma brought on by eating like a starved glutton. Whatever it is, I think it best that I simply tell you about it without frill.

Okay so, like I said, it was the 4th of July. I was enjoying a couple days in the company of a rather good lookin blonde, that included a ride on my bike and dinner at a Peruvian place in Redwood City called Estampas Peruanas (side note… go there… it was great).

But on the 4th, we went to her friends in Morgan Hill (Tina and Scott) and attended their annual rib cook-off. I later learned these folks have been hosting this event every year for about the past fifteen. And clearly have no intention of stopping any time soon. There were about a hundred people and fifteen entries of some of the tastiest ribs you’ll ever encounter in one place. I can say that with confidence because I sampled at least one from every entry there. Strictly research, mind you (burrrrrp).

My fave was the one with the peach-bourbon barbecue sauce with a kick that put my nipples on the ceiling (as they say). Really… it was that good. Of course I will also admit those were the ones made by my lovely date… so I may be just a little biased. Whatever… They were freekin good!

The entire day was spent in the company of some rather cool folks, being entertained 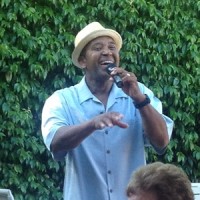 by a rather soulful singer, and enjoying some slamming ribs! If I am lucky enough to be invited again next year, I think I’m going to enter my own. Of course if I measure up… I’ll be bragging about it here.

That’s how I spent my 4th of July. Bikes, babes, and barbecue. Is there anything better?