The Social Power of Cooking

The Social Power of Cooking

Published on May 13, 2012 by Bad Boy Cooking in Commentary 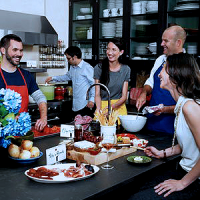 Food. It’s been at the center of our social paradigm since long before the evolution of the civilized world. It’s a natural part of many of our ceremonies. From weddings to wizard gatherings, that which is to be consumed plays an integral role in the success of such events. But notice the title of this post. We’re not here to talk about food per sé

What we’re talking about here is the act of cooking. And even more granular; cooking in the social context. Consider a night at the local Teppanyaki restaurant. The chef is right there, over a very hot surface, in front of you, performing seemingly daring feats with your dinner much to the amazement and amusement of those sharing your table. Before you know it, you’re knee-deep in a conversation with that guy at the other end of the table, commenting about the chef’s knife skill as he, with blinding speed, cuts about a thousand prawns into perfect little butterflies… while blindfolded… standing on one foot.. and… oh wait. Sorry… got carried there. But you get the point. The act of the chef was cause for two people who would have 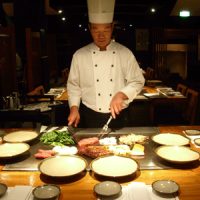 otherwise never known each other, to simply start chatting. How cool is that?

How about potluck parties. You know, a social gathering of humans in someone’s home where entry to such a gathering is dependent upon the food one has prepared for the occasion. Soon conversation is started where one guest regales the others with his adventurous tale of battling the murderous hoards at the local farmer’s market. All of whom fought to the death for those coveted truffles he’s delicately layering into the soft chocolate molds right there while telling the tale. At the end of the telling, and with the presentation of his chocolate truffles, the women of the party throw themselves at his feet while pledging unending devotion.

Hey… it could happen.

While all this may be just a bit tongue-in-cheek, you gotta know, the ability to bounce around the kitchen, looking your own brand of yummy, while preparing something in an entertaining and animated way, is to say the least, eye-catching and more importantly, attention-getting. This couldn’t be more true for the men when they’re the ones cooking. For some reason, perhaps because it’s so unexpected, when a man is in the kitchen in front of any number of women, doin his thing and preparing yummy treats for all, the ladies just swoon. Really.

The take-away message is rather simple. Aimed at men of course… learn how to cook. And learn how to do so in light-hearted, animated, non-stressed, non-neurotic ways. You will be amazed at the social – and dare we say it – romantic, power this will bring.